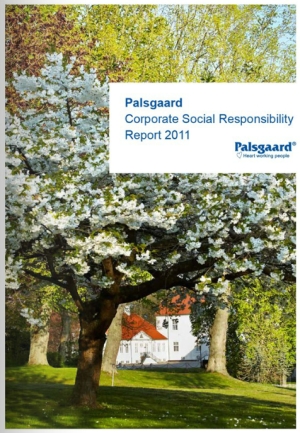 Palsgaard is pleased to annouce that it has published its latest corporate social responsibility (CSR) report. It follows the company’s first award-winning report and further strengthens Palsgaard’s commitment to accountability and sustainability. Jakob Thøisen, CEO of Palsgaard, says, "In our initial report we set down a framework for a CSR strategy. With this second report, we have clarified the focus areas and established action plans for implementing our strategic CSR goals. This strategy includes targets for environmental and safety improvements in our production and for extending the skills of our employees."

Palsgaard received the award for Best First Time CSR Report for its initial report for 2010 from the FSR (Danish Auditors), which has been awarding CSR-active companies for the past 17 years. Charlotte Jepsen, FSR’s managing director, said at the time, "The FSR Awards differ from other awards in the area by having weight and substance. The awards are an endorsement of the quality of companies’ CSR efforts."

Thøisen explains: "As a player on the global market Palsgaard often faces CSR demands from international companies. However, the concept of responsibility is not only a real ingredient in our history and everyday work, but is now also treated strategically with continuous improvements."

Palsgaard considers its CSR responsibilities both in terms of local and international dedication. It has also received an award from the Danish liberal party, the largest political party in Denmark, for its long-standing contribution to the local community and considers high employee satisfaction an important part of its business strategy with a staff turnover of just 4.8% in 2011.

Internationally, Palsgaard has just started construction of its latest factory in Malaysia, designed according to the highest standards in terms of production technology, energy consumption and environmental influence. It is scheduled to be completed in the first half of 2013. It’s subsidiary in Mexico is currently in the process of installing solar panels to produce enough energy for 80% of the plant’s requirements. The company also extends the accountability requirements to its suppliers and has expectations to future market demands for RSPO certified palm oil. Subsequently it has an objective of using only certified palm oil-based raw materials in its products by the end of 2015. Palsgaard is also working towards an ambitious goal within energy and environment of becoming CO2-neutral by 2020.