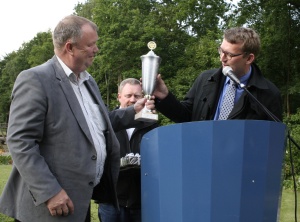 Palsgaard is pleased to announce that the company has won yet another award for its dedication to Corporate Social Responsibility (CSR), this time for its long standing contribution to the local community surrounding the emulsifier factory in Juelsminde, Denmark. Palsgaard received the award from the Danish liberal party, the largest party in Denmark, who for the past 25 years has been honouring companies and individuals that are exceptionally dedicated to CSR.

Since founder and inventor of the first commercial emulsifier, Einar Viggo Schou, purchased the Palsgaard estate in 1908, his values, expressed in just three words loyalty, commitment and responsibility, have been the keystone of the company. Schou started out by donating to the church in Juelsminde and making the manor park and library open to the public, and since then the company has donated 16.5 hectares of land to the Hellebjerg Sports and Youth School, established the golf course in Juelsminde, allowed staff members to be part of the local voluntary fire brigade and helped establish a new scenic walking path along the coastline, to name just a few of the company’s activities. Palsgaard has consistently maintained a tradition for contributing to and providing financial support to the local community and especially to voluntary work in connection with local sports and leisure activities.

When presenting the award to Palsgaard chairman, Birger Brix, Troels Lund Poulsen, MP for the liberal party and former minister for the environment, explained why Palsgaard had been chosen to receive the award: "For more than a century, Palsgaard has been a pioneer in CSR, and at the same time its management has prioritised the welfare of its employees and its surrounding community. All in all, the company lives up to all the aspects on which the liberal party focuses when choosing the recipient of the CSR award."

Birger Brix happily accepted the award and noted: "It’s always nice when somebody else notices what you are doing and what you think is the right thing to do."

Palsgaard’s CSR activities are explained in further details in the company’s upcoming Corporate Social Responsibility Report for 2011, which will be published within the next few weeks.