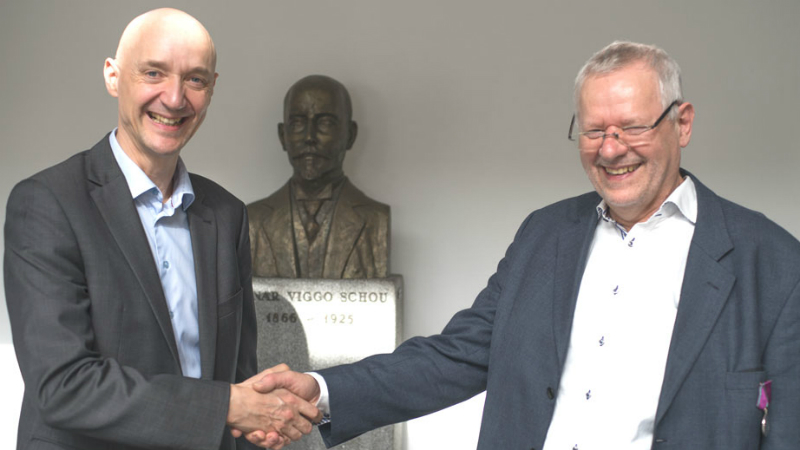 Nexus’ current CEO Viggo Norn is a highly respected scientist and entrepreneurial innovator. After leading the company for more than 25 years, Viggo will officially be replaced by Claus Hviid Christensen at a ceremony at the company’s headquarters. Viggo was instrumental in helping Palsgaard to grow during his time, providing innovation after innovation to meet market needs.

Claus joins Palsgaard just as the company celebrates 100 years since founder Einar Schou invented the modern commercial emulsifier. The new CEO for Nexus will also have growth on his agenda because Palsgaard is growing at a rate that will see revenues double over the next five years and the current product range is only part of the growth surge.

Calus says: "We will compete in more areas, not just food, and will start to compete more and more with larger companies.

"We are going to cover a lot of new ground with our emulsifiers, beginning with our most recent move into polymers and developing this along with other entirely new business segments. In fact, given that our products, their derivatives, and our competencies can be expanded into so many new potential applications and services, we need to choose the next steps with care."

Educated as a chemist, Claus has experience both as a senior executive in large and small technology enterprises, and as a full professor in a lengthy and award-winning international academic career. It’s a remarkable combination that brings a broad palette of new skills to both companies, with innovation in the driving seat.

Claud adds: "In my first job, I learned that chemistry can actually change the world," he explains. "Over the years, this interest has more become a passion for developing innovative products and solutions than for chemistry itself."

Group CEO and chairman of the Schou Foundation Birger Brix is confident about the value the group’s newest recruit is expected to add. He said: "Nexus and Palsgaard form a uniquely synergistic constellation in which research, development, and innovation is conducted in separate, but closely related, entities to ensure that the horizon is sufficiently long and the ambition sufficiently high.

"We’re proud to be able to attract talented people like Claus to our company, and that he wants to be part of a very exciting future, taking Nexus to the next levels as the group grows."

Already, Claus Hviid Christensen has spent the first three months of 2017 getting to know Nexus and its staff before taking over the reins. And he is clearly impressed by his new team.

Claud says: "We offer a very competitive cocktail for the future, building on many, many years of research, insight, and know-how within our technical and scientific focus areas.

"Due to this focus, I think it is fair to say that my colleagues are international capacities, which is very impressive for a company our size. But when you combine this expertise with our high ambitions, the belief expressed in our slogan "heart working people", and our true dedication at Palsgaard to serve our customers, you probably understand the main ingredients in the cocktail we offer."