The Indian dairy market is the largest in world; the country is the world’s leading producer and consumer of milk and has the world’s biggest dairy herd. In 2017 alone, however, 11 people were killed by Hindu extremists in connection to claims of the slaughter or sale of cows, and average milk yields remain well below international standards. These developments have analysts questioning: just how safe is the dairy market in India? 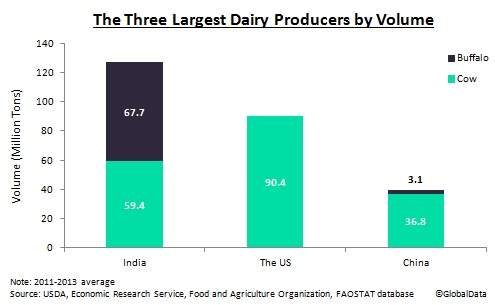 India’s political shifts in recent years have had multiple contradictory consequences in the country’s culture and economy. As in other countries, alongside economic development, international trade and increased product availability, Indians have consumed more milk and other dairy products. This has fueled demand for both cheaper products and a more extensive distribution infrastructure, which the government has supported through the National Dairy Plan. In production terms, the growing dairy sector accounts for approximately one fifth of the value of India’s farm output.

Due to India’s large young population, government support and growing disposable incomes amongst consumers, the demand for dairy looks set to continue. However, with the success of prime minister Narendra Modi’s Bharatiya Janata Party at the polls, and a political shift towards populism and Hindu nationalism, the country has experienced a degree of religious revival. This includes the veneration of cows and hate crimes towards those suspected of harming them, with suspicions particularly inflamed towards religious minorities. Muslims were the main recipients of violent cow-related hate crimes during 2010–2017, and made up 84% of the 25 people killed in that period, with 2017 the worst year on record for such crimes.

In 2004, the Bharatiya Janata-controlled state government of Madhya Pradesh banned all cattle slaughter. In 2012 this was amended to extend to prison sentences and, concerningly, to shift the burden of proof to suspects rather than accusers – who are now presumed guilty unless they can prove their innocence. It became illegal to send cows to slaughter nationally in May 2017, and 24 out of 29 states in India currently have various regulations prohibiting either the slaughter or sale of cows.

The removal of cow sales and slaughter has led to unforeseen consequences; it is thought that 20 million cows are now abandoned each year in India, and as they are considered holy animals with the right to roam, these animals often go on to destroy crops, damage property and even attack people.

In the Gonda district of Uttar Pradesh, around 300 animals were freed, destroying crops in all agricultural fields. The ban on slaughter has now created a squeeze on the dairy supply in India – farmers now have no incentive to expand their herds, in stark contrast to the government’s plan to increase the milk supply. This has led to food price inflation and volatility in the price of milk. The prohibition of this part of the supply chain is thought to have deprived farmers of more than US$11 billion in leather and meat exports and has emboldened Hindu extremists and mobs.

To solve the problem of high demand for dairy with unsustainable sourcing, many farmers are instead exchanging cow herds for water buffaloes, which are legal to slaughter, more acclimatized to the heat, but also produce less milk than the average cow. Water buffalo milk is also fattier and tastier according to consumers, which results in a more scarce and premium product which fetches a higher price.

As India’s taste for milk is expected to continue to increase and slaughter laws force farmers to less-productive animals, it is expected that this exceptionally large dairy market will continue to grow and remain lucrative. Modi’s party’s support for the Hindu culture war in India has shown that, for now, cultural standards trump economic arguments, which will leave demand high and supply low.